Round Table Discussion on Child Marriage Law in Bangladesh

On 30th April, 2019, Integgra researchers Niaz Asadullah and Zaki Wahhaj participated in a round table discussion on the 2017 Child Marriage Restraint Act at the Daily Star Conference Hall in Dhaka, jointly hosted by Population Council and BLAST (Bangladesh Legal Aid Services Trust) in collaboration with the University of Kent, UK and the University of Malaya, Malaysia.

In February 2017, the Bangladesh parliament approved a new law aimed at restricting early marriages, the first of its kind in nearly 90 years. The 2017 Child Marriage Restraint Act increased the severity of punishments for adults who engage in or facilitate child marriages but also introduced a special provision for cases where a court rules the marriage is in the ‘best interest of the child’.

The discussion began with a presentation from Barrister Sara Hossain, Honorary Executive Director of BLAST, on the historical and present legal situation, highlighting the multiplicity of laws dealing with child marriage in Bangladesh, under both family law and criminal law, and the lack of uniformity between them. While there are very few legal cases where the new law has been applied in court, she noted that it has had significant impact on how the informal justice system deals with child marriage cases.

Dr Zaki Wahhaj presented new research on the impact of the new law on social attitudes towards child marriage in rural Bangladesh, using household surveys and a video-based information experiment. The evidence showed that while the increased severity of punishments in the new law make people more supportive of initiatives against child marriage, the special provision can increase the social acceptance of child marriage practices. 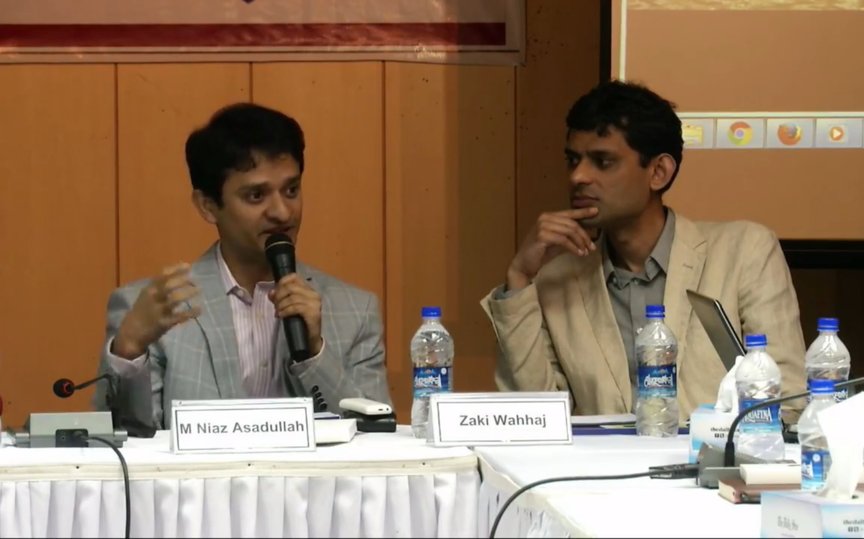 Dr Sajeda Amin, Senior Associate at Population Council, gave a presentation on skill development programmes for adolescent girls that provide an alternative to legal approaches to eradicating child marriage. These programmes focused on empowerment through skill development, creating safe spaces, providing role models, and aimed to nurture the perception among members of the community that adolescent girls were assets rather than liabilities.

Dr Abul Hossain, in his remarks, noted the importance of research-based evidence on the social impact of the new child marriage law to under for the government’s own strategy, and thanked the presenters for their work in this area. He highlighted the recently published government action plan on child marriage in Bangladesh, and explained how various stakeholders could engage with it. He expressed the hope that the government agencies, NGOs, funders and researchers at the event would collaborate in their work on child marriage in Bangladesh going forward.

Nurun Nahar Osmani explained in her remarks that a bidhi-mala, approved last year, has substantially reduced the scope of the marriage of underage girls under the new child marriage law. However, she noted, the implementation of the law remains weak and will be subject to abuse in the future. She argued that the new law should be used, not as an instrument for punishment, but as a means of changing social attitudes and urged wide-ranging media campaigns in rural areas to inform parents, adolescent girls as well as boys about the legal restraints on child marriage.

Rasheda K. Chowdhury, in her concluding remarks reiterated the messages from the special guests. She emphasized the importance of research evidence for devising effective strategies for combating child marriage going forward, giving the example of successful education campaigns in Bangladesh during the 1990s that, based on research evidence, opted to focus on creating a demand for education rather than punitive measures for parents with out-of-school children. She argued that schools should be an important channel for disseminating information about child marriage, particularly to inform minors at risk how to ask for help.

A livestream recording of the event is available here.